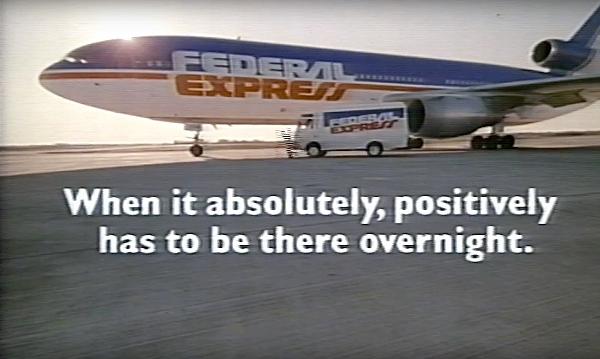 After three years of operations and $29 million in losses, Federal Express gave up trying to compete head-to-head with air-cargo leader Emery Air Freight. Instead, it decided to focus the company on overnight service.

Federal Express could have positioned itself as: “The overnight company.” But it didn’t. Instead, it launched a campaign that not only turned around the brand, but also made marketing history: “When it absolutely, positively has to be there overnight.”

When Scarlett O’Hara said to Rhett Butler in “Gone with the Wind,” “Rhett, if you go, where shall I go, what shall I do?” he could have said, “I don’t care.” But he didn’t.

When Frank Perdue was the spokesperson for his chicken brand, he could have said, “Perdue, the tender chicken.” But he didn’t.

What he said built the brand and also made marketing history: “It takes a tough man to make a tender chicken.”

What makes a slogan memorable? Emotion.
A slogan needs a dose of real emotion in order to make it memorable. “Overnight” articulates the FedEx position, but it needs “absolutely, positively” to add the emotional frosting to the positioning cake.

Compare the old slogan with FedEx’s new slogan, “We understand.” You can visualize someone yelling into the phone, “My package absolutely, positively has to be in L.A. tomorrow.”

And the FedEx clerk on the other end of line calmly says, “We understand.” The words have meaning, but there’s no emotion in the concept of “understanding.”

Sure, slogans should be as short as possible, but there’s a trade-off. Slogans should be long enough to contain some words that knock on the right side of the consumer’s brain. The emotional side of the brain as opposed to the left side, the logical, analytical side.

“Just do it” is one of those slogans. It’s memorable because the slogan emotionally touches a “procrastination” button that exists on the right side of your brain. “Why keep thinking about it? Just do it.”

“A diamond is forever” is also a memorable slogan for exactly the same reason. It touches a “love” button on the right side, especially among women.

Memorable slogans are usually long.
In truth, it’s difficult to find many short slogans that are memorable. Most of the slogans people remember are relatively long.

Owning a word can take many words.
While the objective of a marketing strategy should be to “own a word in the mind,” the tactics to do so might involve a number of words.

Mercedes-Benz owns “prestige” in the mind even though it has (rightly so) never used the word in its advertising. Rather, Mercedes built its prestige position with high prices and a very effective advertising slogan, “Engineered like no other car in the world.”

Volvo is an example of a lazy approach to branding. Apparently, Volvo management thinks, “We own ‘safety’ so all we need to do is to remind people of that fact.” Hence the current Volvo slogan, “For life.”

For life? That’s a pretty anemic way of alluding to a major problem in America, the annual carnage on our highways. Last year, there were 33,963 traffic deaths, by a wide margin, the No.1 cause of accidental death in America.

Sure, traffic deaths are declining, but the reason is probably better and faster medical help, not fewer accidents. (If you compare the war in Iraq to the war in Vietnam, you will find similar statistics. Fewer deaths per hundred casualties.)

“For life” is an insipid slogan to deal with the issue of automobile safety. You might expect the company to get angry and express the issue in an emotional way. Something like the current seat-belt campaign.

The posters don’t say: “Seat belts for safety.” They say: “Click it or ticket.”

Ironically, Volvo’s new chief executive, Stefan Jacoby, was portrayed in The Wall Street Journal last month as looking for ways “to pump more emotion into the brand.” One of the ways Mr. Jacoby is considering, according to the Journal, is by “going retro.”

I have a suggestion. Why doesn’t Volvo launch a full-bore campaign for automobile safety, starting with the dropping of Volvo sports cars and convertibles? Why not do for “safety” what Dove has done for “real beauty.”

Another idea being considered by Volvo, according to the Journal, is “creating bigger and more luxurious cars.” Why is it that management’s solution to every problem usually involves expanding the brand? This can work to some degree when a brand is strong. But it’s usually a serious error when a brand is weak.

Study history, Mr. Jacoby. Volvo was once on a roll, buttressed by reams of safety publicity. As recently as 1992, Volvo was the largest-selling European premium car brand in the U.S. market, outselling BMW, Mercedes-Benz, Audi and Jaguar.

How the mighty have fallen. Last year, both BMW and Mercedes each sold more than three times as many vehicles in the U.S. market as Volvo. Even Audi outsold Volvo.

Narrowing the focus at Folgers.
Brand expansion is the direct cause of weak slogans. A broad line often encompasses many products with little in common, forcing the use of platitudes and generalities. Yet you sometimes can develop strong slogans for line-extended brands by concentrating on one aspect of the brand.

Take Folgers long-running slogan “The best part of wakin’ up is Folgers in your cup.” Why would a coffee brand focus on breakfast when coffee is consumed all day long? (Check out your local Starbucks at 5 p.m.)

The same reason Federal Express focused on overnight delivery. If you “narrow the focus,” you can often create a slogan with a strong, emotional component. And you can do so without giving up any segment of the market.

“If it’s good at breakfast, it’s bound to be good the rest of the day,” thinks the consumer. Like Folgers, FedEx never did give up anything either. From Day One, it has always provided two-day and three-day services.

The superiority of Folgers approach is documented by sales. Two decades ago, Folgers led Maxwell in ground coffee by 30%. Last year, Folgers’ lead was 73%.

Yet I wonder whether the advertising community would agree with me. Creative people tend to prefer shorter slogans. Advertising Age selected “Good to the last drop” as one of the top 100 advertising campaigns of the 20th century (No. 15.)

“The best part of wakin’ up” didn’t make the list.

Thinking narrowly isn’t logical.
Logic suggests that you want a slogan that’s all inclusive. Let’s reach out and touch everybody. And furthermore, let’s cram as many ideas as we can into our slogan (as well as keep it short.)

Walmart management probably thinks its current slogan, “Save money. Live better,” is an improvement over “Always the low price. Always.”

The new slogan tells consumers what they can do with the money they save by shopping at Walmart. It’s a broader, more-inclusive slogan.

But it doesn’t touch an emotional button the way that “Always the low price. Always,” did. The repetition of the word “always” suggests that when you absolutely, positively want to save money, shop at Walmart.

And why would Avis drop “Avis is only No. 2 in rent-a-cars, so why go with us?” Actually I know why. They’re no longer No.2.

But without the buildup, its current slogan, “We try harder,” seems lame. It lacks emotion.

And I suppose the BMW folks are congratulating themselves for “Joy,” their new master slogan with “The ultimate driving machine” relegated to a secondary position.

It was bound to come. Master slogan and sub-slogans are analogous to master brand and sub-brands. Marketing is like the income tax. Every year it gets more complicated.

Weak country brands.
If any brand needs an emotional connection, it’s a “country” brand. Thanks to the popularity of branding, many countries around the world are launching branding campaigns. And, as you might expect, they almost all use short, emotionally-deprived slogans.

With some 200 countries in the world today, we may run out of adjectives to promote before we run out of countries.

Slogans you can believe in.
In the 1920s, according to author Ken Roman, a London advertising agency (Mather & Crowther) created an advertising slogan to get consumers to “eat more fruit.” The eight unforgettable words they created were: “An apple a day keeps the doctor away.” Today, of course, that same slogan would probably have been shortened to “Got Apple?” Even Barack Obama’s successful campaign for the White House did not use the single word “Change.” He used five words: “Change we can believe in.”

“We can believe in” are the words that added an emotional layer to the concept of “change.”

A slogan doesn’t have to be long to have emotional power. “Just do it” is one of those enduring slogans that have touched millions of people.

But “Rule the air,” Verizon’s new slogan? Just exactly what human emotion does that slogan conjure up? I much prefer “Five times more 3G coverage.” Any owner of a smartphone can relate to that.

When Abraham Lincoln was asked how long a man’s legs should be in proportion to his body, he replied, “They ought be long enough to reach the ground.”

How long should a slogan be? It should be long enough to reach an emotional connection in the consumer’s mind.

The Language Of Brand Licensing