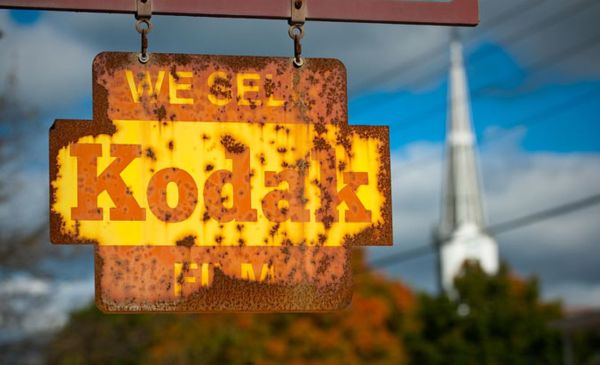 Let’s pay respects to Eastman Kodak which appears to be rapidly fading into black, the victim of it’s own arrogance and the forces of creative destruction raging in our digital age.

Once the bluest of blue chip brands, Kodak is eminently about to enter some form of bankruptcy protection. Of course, no surprise there, but as the Holiday Season draws near, I am nostalgically reminded of Kodak’s “open-me-first” dominance of the season and all the special “Kodak moments” that were the foundation of its dominant position in our culture for over a century.

This is a dramatic ending to a brand that was once as globally recognized as Coca-Cola.

With $800 million in cash on hand and a monthly burn rate of $70 million, it’ll take less than a year for Kodak (like Polaroid) to become a history lesson for marketing MBA’s to ponder in business schools. Kodak is now frantically trying to stay afloat by selling their intellectual property. Buggy whips anyone?

The Irony Of The Digital Age

Some brand marketers may not be aware that in 1975 Kodak engineers invented the digital camera. But like most innovations, the idea was not deemed particularly useful by the management of a company deeply cemented into its dominant chemistry based film business. The irony is palpable for sure – made worse by the arrogance of Kodak’s executive management over the years.

The last spool of Kodachrome film rolled out of a Mexican factory in 2009. With instant point and shoot digital photography on cheap cell phone cameras, even consumer-grade digital cameras are quickly becoming relics. Worse, only a tiny fraction of consumer images taken on cell phones or digital cameras gets printed to paper. Who needs printed pictures when people share digital photos on social media networks?

New economic models and global competition have destroyed other giant companies, but digital technology has been a destructive firestorm that has made every aspect of Kodak’s business completely irrelevant. I can think of no better example of Austrian economist Joseph Schumpeter’s “creative destruction” principle at work.

The Arrogance Of Success

Kodak is a lesson to any CEO in an industry dominant company – things change, nothing lasts forever. (This goes for Apple, Google and Facebook). Almost from it’s founding in 1890, the money came rolling in decade after decade fueled by the razor-blade strategy of selling cheap cameras and reaping lavish profit margins through consumables of film, chemistry and paper.

By the mid-70’s Kodak owned nearly 90 percent of the film and camera market. With this level of dominance, you can just imagine what kind of executive culture was brewing in the Petri dish of marketplace success. Arrogance and complacency are often the by-products of an unassailable competitive position, and Kodak has been no exception.

When Fuji entered the US market, Kodak executives refused to believe that Americans would embrace a foreigner over their sacred brand. Big mistake. Rebuffing its chance to become the official film of the 1984 Olympics in Los Angeles, Fuji brilliantly exploited the opportunity and achieved a permanent hold in the US market. The beat of arrogance played on — when Walmart invited Kodak and Fuji to bid on their in-store film processing business Kodak sent their top sales guy. Fuji sent their President — and won.

Then came the digital age. Although Kodak had embraced many me-too digital features in its products by the mid-80’s, it’s executives could not fathom a future where film would have no role whatsoever in image capture. Nor could they manage their bloated business, pension obligations and executive compensation on the low profit margins and competitive pace of a marketplace overflowing with short product cycle technologies.

The Kodak Moment Has Passed

Every brand has a lifespan – a beginning, middle and an end. That said, companies can remake themselves on a scale now confronting Kodak. IBM did it. GM is on that road now. It can be done. Alas, we may be witnessing the last Kodak moment right now.

True enough, it could be argued it’s premature to write off the Kodak brand. Kodak has a century of consumer marketing expertise and a viable technology portfolio to leverage. However, without visionary leadership at this critical time, Kodak may be forced to sell the seeds of its potentially brighter future and fade into black.

Strong Brands And The Fairness Requirement

Marketing And The Occupy Movement Brand