Is the new Kaepernick 30th Anniversary Just Do It Campaign a smart move for the Nike brand? In this age of polarization and change, every brand owner should find Nike’s decision worth analyzing. For me, it’s of particular interest as I held the position of Director of Marketing Insights & Planning for Nike From 1986 – 1996 and was at the very core of Just Do It, providing the brand brief to Scott Bedbury, Nike’s Advertising Director prior to its creation.

So, let’s begin by taking a look at some of the controversial aspects of the Kaepernick JDI campaign. Perhaps the first question to ask about this campaign from a brand planners perspective is:

What is it about Colin Kaepernick’s character that Nike finds so important to attach it to the Nike brand?

Developing brand character has many things in common with screenwriting, and the attempt to develop relatable characters for film and TV. Relatable characters are drawn up as sympathetic heroes on a mission to achieve worthy goals. They’re often created as original, attractive, intelligent and provocative, and definitely not cliché, predictable or superficial. They have a definite point of view and a convincing way of getting it across. Many also have an underlying sense of humor and irony, which help makes it easy for people to relate to them. They’re frequently involved in acts of moral integrity to resolve some sort of problem or dilemma, and they speak in a distinctive voice that resonates. As their story develops, the complexity of their character emerges, often showing surprising depth. Above all, relatable characters get people talking about them.

In Nike’s current campaign, Kaepernick has certainly demonstrated that he has character, conviction about his beliefs, concern for social justice and he certainly has people talking about him. But, is he really a sympathetic hero? To segments of society struggling with experiences of social injustice he definitely is. However, to segments of society who honor the symbols of our national idea, identity and ceremonies he carries strong and negative emotional associations.

In launching this new campaign Nike is risking alienating a huge segment of its U.S. consumer base, perhaps as much as half. Why would they do that? Perhaps they are thinking that it will tighten the tribe with millennials, who tend to be involved in protest movements, particularly when political leaders and other authority figures are not aligned with their feelings and values. They see Kaepernick as a champion of individual rights, fighting for a sense of social justice, for not just people of color, but all minorities and people who feel at times like second class citizens.

How people are regarded and respected is of course a big issue and potentially an explosive one. High or low regard is a powerful human emotion, that can be conveyed by a tone, a look, a posture, a gesture and certainly by actions, words and behaviors that are routinely demonstrated.  To have a high regard for the people you serve, work, play or communicate with is a necessary prerequisite if you wish to achieve sympathetic resonance, relevance and salience as a brand. Low regard and low respect can be felt a mile away and sucks the energy out of the invisible brand field. These emotional forces now present a dilemma for Nike. This campaign is simultaneously projecting both high and low regard energies to different segments of the population. That is what makes this campaign so emotionally polarizing.

So, this campaign will scatter parts of the Nike tribe, of loyal American patriots and people who serve or have served in our armed forces, government or institutions that rely closely on a healthy government and national image. These people see not standing for the national anthem at a sporting event as an outward sign of disrespect for the idea of America and all the sacrifices made in the name of the nation. They see the gestures taken by Colin Kaepernick as a sign of questionable character. They see his public gestures as inappropriate and out of place.

For these reasons, I view the 30th Anniversary of ‘Just Do It’ campaign as delivering some short-term pain for the Nike brand. It will not accomplish what the original JDI campaign did.

The original Just Do It campaign was designed around the idea of celebrating the joy of the experience of participating in sports and fitness activities when they are as good as they get. It was not polarizing, it was inclusive, unifying and celebratory in tone. The original idea of celebrating the joy of all kinds of sports and fitness activities could be sympathetically interpreted for everyone, pro sports athletes to fitness amateurs, young and old, men and women, people in America, people around the world. No one was excluded.

This latest version of the Just Do It however, I predict will generate a level of social debate that, over time, will elevate greater social understanding for the risk Nike has taken with this campaign. For many urban and minority professional athletes this campaign will draw them closer to the brand. They like that Nike is supporting individual athlete rights, acts of moral conscience, conviction and protest. For the league or the nation to criticize their freedom of speech or expression is dimly viewed. But, the fact that we can have dialog about the pro’s and con’s of such an event and moment in our history, speaks loudly about American values and human values. The current debate would probably make the founding fathers of the United States proud.

The founding fathers were adept at reconciling conflict, contradiction and paradox. Sometimes the process of reconciling the opposing forces (contradiction) is referred to as the paradox process. We all have the power in our minds to meditate on the nature of any conflict. To examine the opposing forces with an eye towards reconciliation. This work is performed inside our minds, in the location of the third eye (aka the inner eye). After a sufficient period of mediation, if one is earnest in seeking a new solution, one often experiences a shift in cognition, where in a blinding flash of revelation a new solution is presented. This entire process of movement of thought from lower to higher levels is codified in a symbol found on the dollar bill. The unfinished pyramid with the all-seeing eye at the top is also a symbol for the paradox process, which our founding fathers wanted to encode into our government institutions, through debate, to help make the nation a better place.

So at the end of the first day of the campaign launch, Nike’s stock declined 3.2%. After the initial PR storm blows over how this campaign plays out on sales and company valuation will take a quarter or two. The polarity of feelings about it will drive some people into and out of the brand.

Dan Wieden, co-founder of W+K, Nike’s Ad Agency and the originator of the Just Do It slogan once said, “to be on the cutting edge means someone or something needs to be cut”. He wasn’t afraid to take controversial chances and he loved working on Nike’s business because this was part of Nike’s brand DNA from the start. 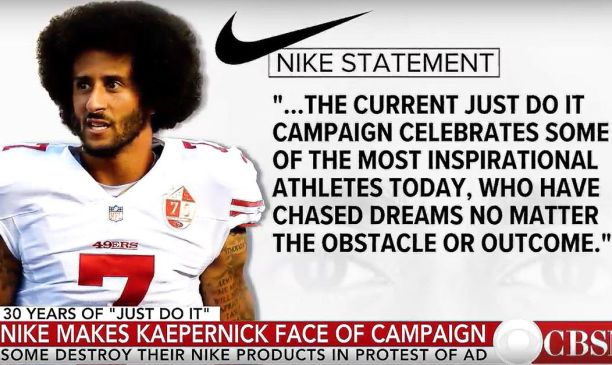 What do I personally sense will be the result of this campaign on the Nike brand? Nike is a very ubiquitous brand. It has broad global appeal. In the U.S. market I sense this campaign will polarize its customer base and result in a loss of some business. How much is hard to say. It could be substantial if enough loyal patriots are activated to send a signal to Kaepernick and Nike for their perceived disrespect. In a global sense, this campaign will probably generate a net gain in brand sentiment. Millennials and people of different ethnic backgrounds will probably identify with the nerve that Kaepernick had to protest a perceived injustice, at risk of harming his playing career. So, in these circles, he’s perceived as a bit of a martyr for a cause bigger than himself.

The irony in this controversy, is that the idea of America, its founding values, gives Colin the right to free speech and expression. At the end of a critical analysis using the paradox process both the idea of respect for free speech, protest, American national pride and the ideal that Colin Kaepernick is fighting for (social justice) can all co-exist at the same time. To think that we have a choice of one or the other is a false choice. America is a great nation because we can speak our minds in the taking on of worthy causes, even in the face of conflicted opinions. Many times we get caught on the twin horns of a dilemma by our perception of false choices, either choosing one side or the other, not seeing with our inner eye that a solution can exist that reconciles both ends of the spectrum. After several quarters of social media dialog on this subject, I expect our collective consciousness on this topic will rise higher and advance.

My prediction: Short-term pain for Nike’s brand, but long-term gain. The social discussion around the campaign will elevate public understanding of the greatness of America and the need for more respect and regard for all people, of all colors and classes. The evolution of our understanding of this topic will in the long-term allow some defectors to come back to the Nike brand. Some, but not all. Not all people are cut out for critical thinking or the use of a problem solving tool like the Paradox Process. Critical thinking is hard work and it requires shifting perspectives, walking around issues and looking at them from all sides. Not everyone is willing or able to do this kind of work. Extolling them to ‘Just Do It’ is by itself is not enough.

So, Nike is taking a big risk by running this campaign. It’s a character defining moment for the brand. The question of course is around ‘What kind of character?’ Positive or negative. The public will ultimately decide this.

What are your thoughts? Do you think Nike is setting a positive example here or a negative one? Send us your comments, questions, insights or perspectives. Or comment below. This is a worthy social debate.

Brands And The Changing Art Of Persuasion